Antarctica Inside Scoop: Guest Blog by Lauren and Jim Farrell!

Last November we went on a 3-week expedition to the Falkland Islands, South Georgia Island and the Antarctic Peninsula. This was an incredible trip, maybe our best ever! 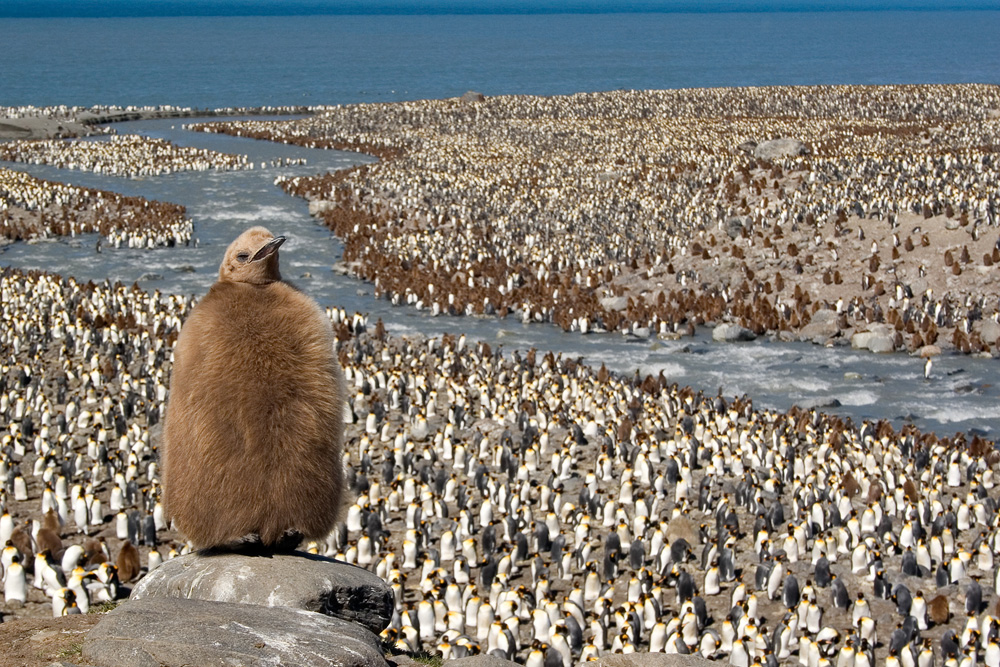 Maria from Hidden Places advised us about the choice of the trip with Polar Latitudes, the timing and even the suite we should book – and she was spot on!

Hebridean Sky was the right size and level of luxury for the time at sea. Our Promenade deck suite was worth the extra money as we probably went out on deck 3 or 4 times a day to see a whale or an iceberg, and it was only a quick run to the cabin to get our cameras and jackets. 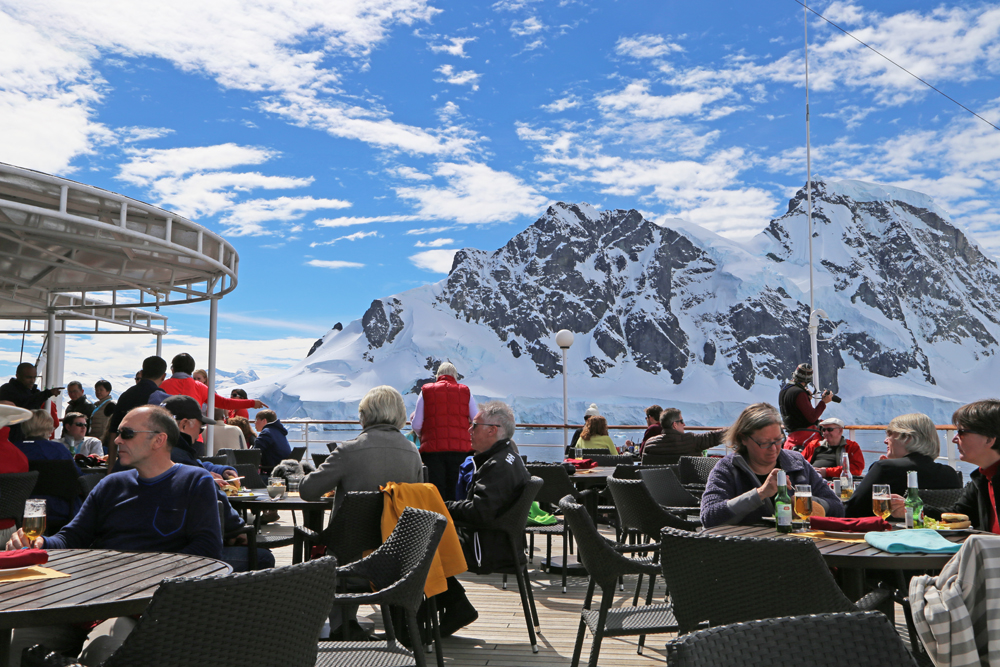 The public spaces were also good, with dedicated areas for meals, lectures and socializing. We used the Lido deck on the stern for meals on several occasions, particularly for a lighter lunch. 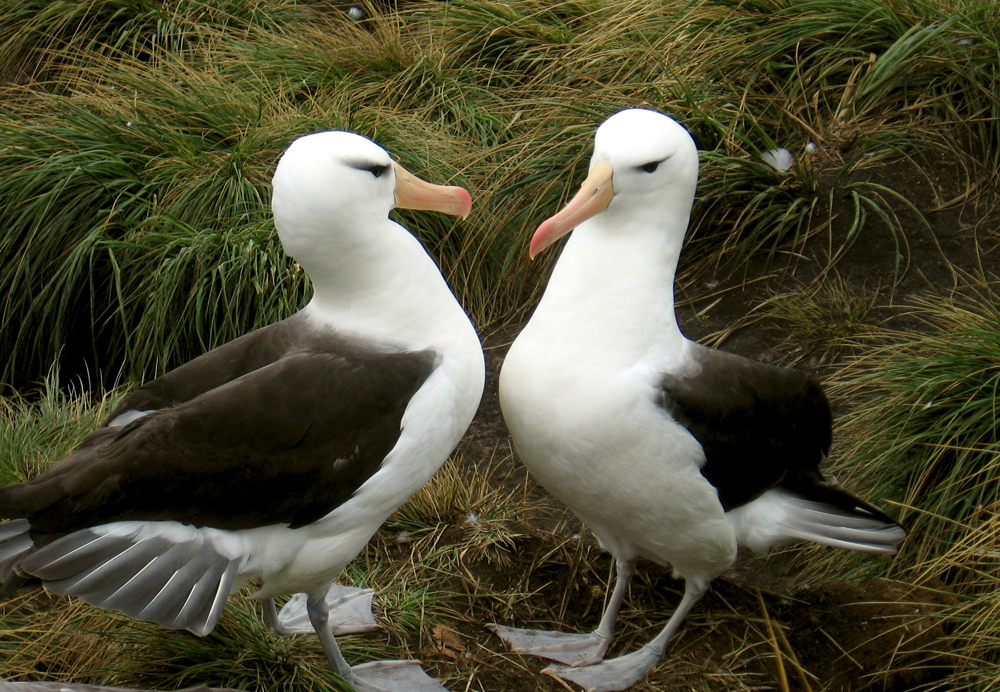 Before the trip we had thought of the Falkland Islands as just a stopping point on the way to South Georgia, but in fact they are they are really special. Our first stop was West Island, an incredible rookery for Southern rockhopper penguins among the black browed albatross nests. Seeing the penguins jockey for space among the elevated tussock nests of the albatrosses, with the albatross flying right above our heads, was a special way to start the trip. 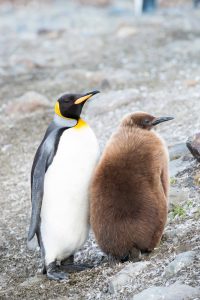 On Saunders island we we saw our first small colony of King penguins, along with three other species of penguins: Gentoos, Southern rockhoppers and a few magellanics. Throw in some sheep among them and you get quite a sight! 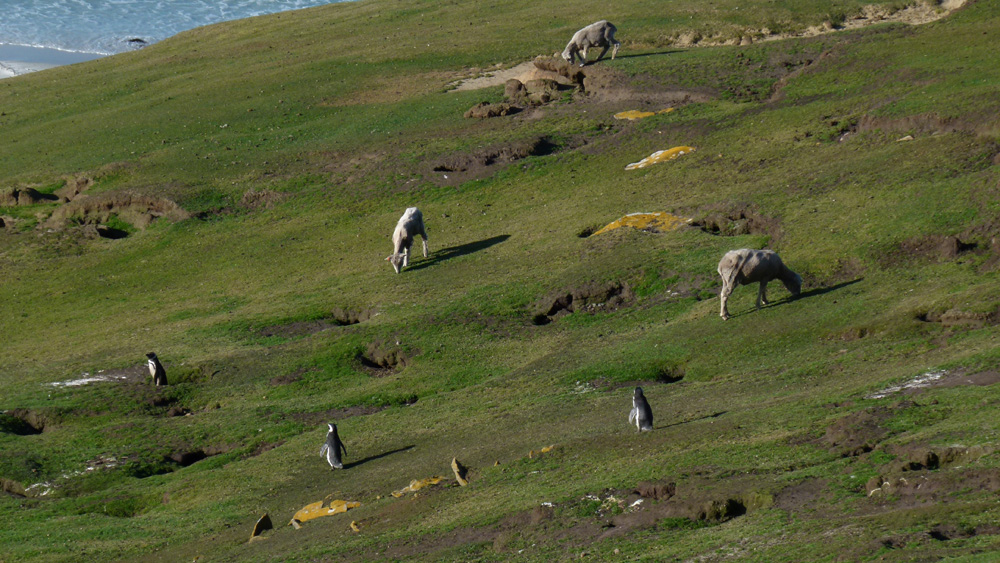 On the second day in the Falklands we stopped in Stanley. The place has a British flair, and the museum is really special. Then we set sail for South Georgia Island! 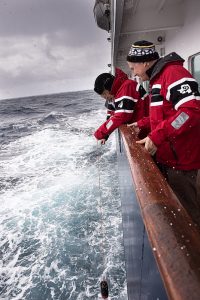 En route we took part in Citizen Science program. We joined the oceanography group, measuring water temperature and salinity. It was a nicely run program; we felt we were really contributing to scientific observations.

South Georgia was the highlight of the trip. Antarctica is spectacular, but when you take the top 8000 feet of the Alps, put them in the middle of the Southern Ocean with glaciers everywhere, the history of Shackleton and whaling, and hundreds of thousands of penguins, it is really hard to compare. 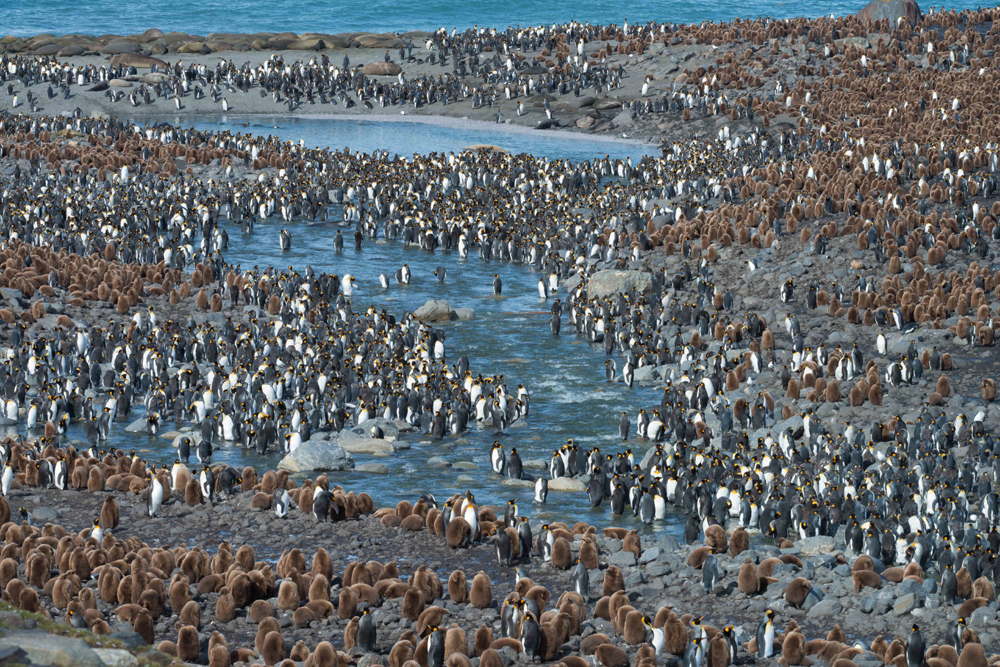 Salisbury Plain was everything we hoped for – fifty thousand king penguins with tons of crazy brown chicks running around. We probably spent three hours standing in the snow just watching them do their thing. 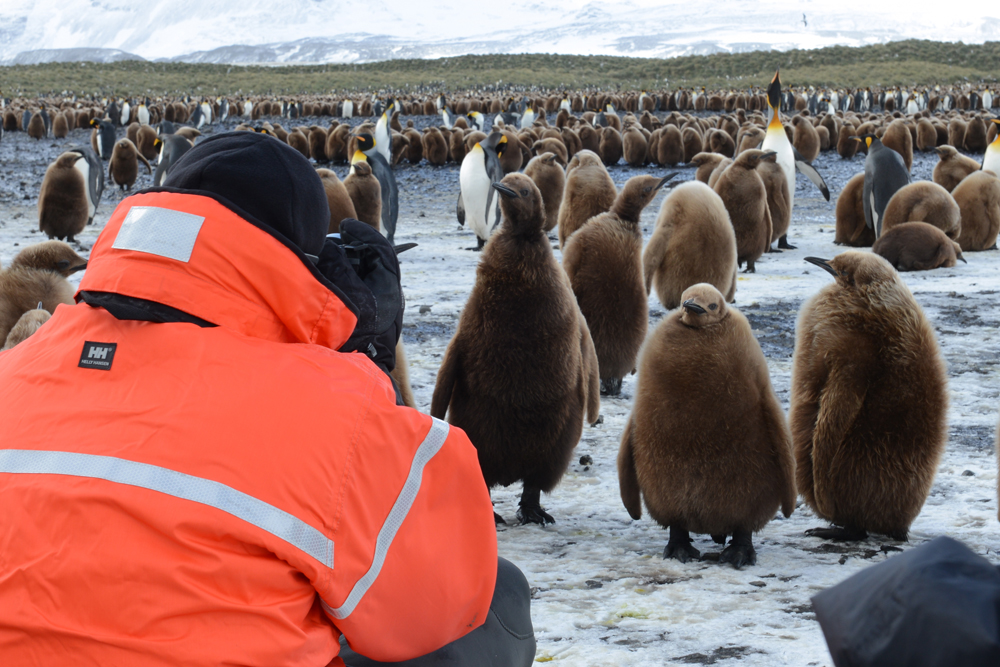 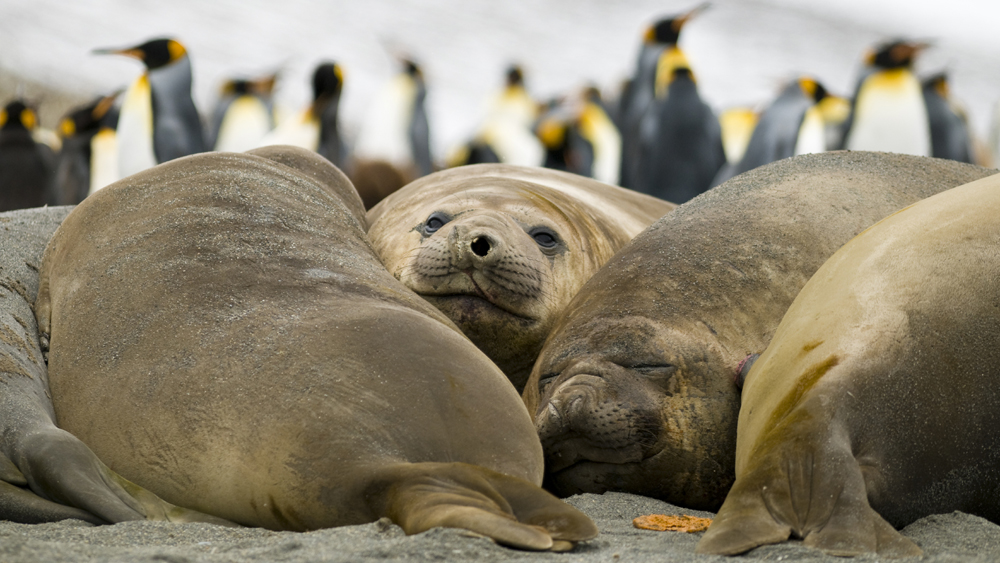 Gold harbor had penguins and a beach full of elephant seals with their weaners. We took over a hundred pictures of just the weaners. 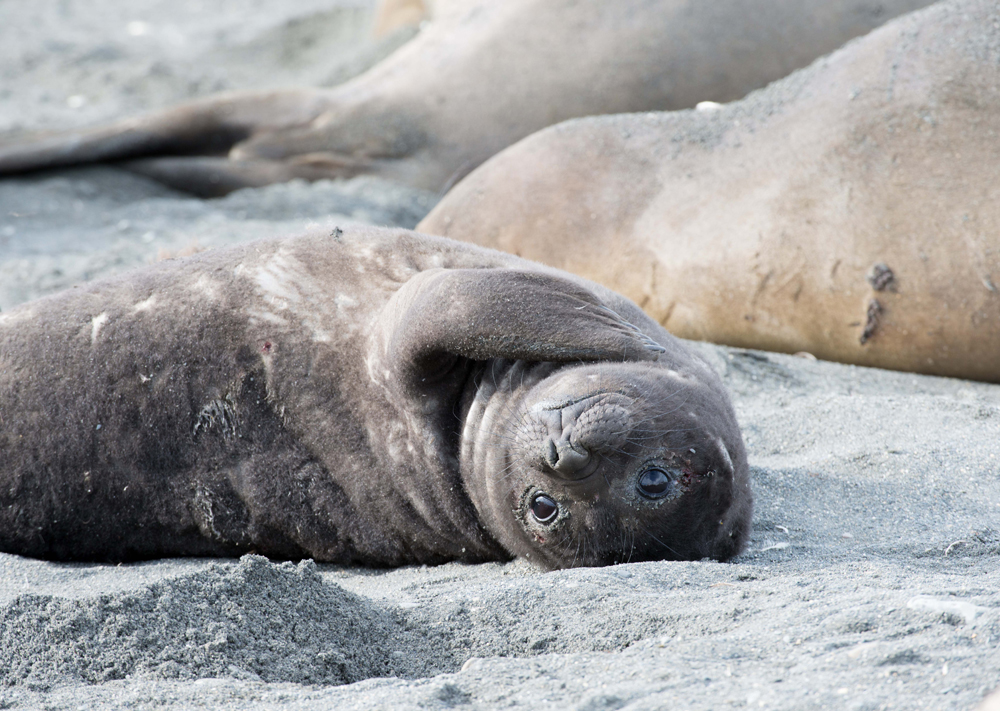 One of the expedition team leaders was Seb Coulthard who was part of the crew that recreated Shackleton’s voyage from Elephant Island. It was great having him aboard, not just for his historical knowledge, but the insight from that experience. Seb led a toast to ‘the boss’ at Shackleton’s grave in Grytviken. 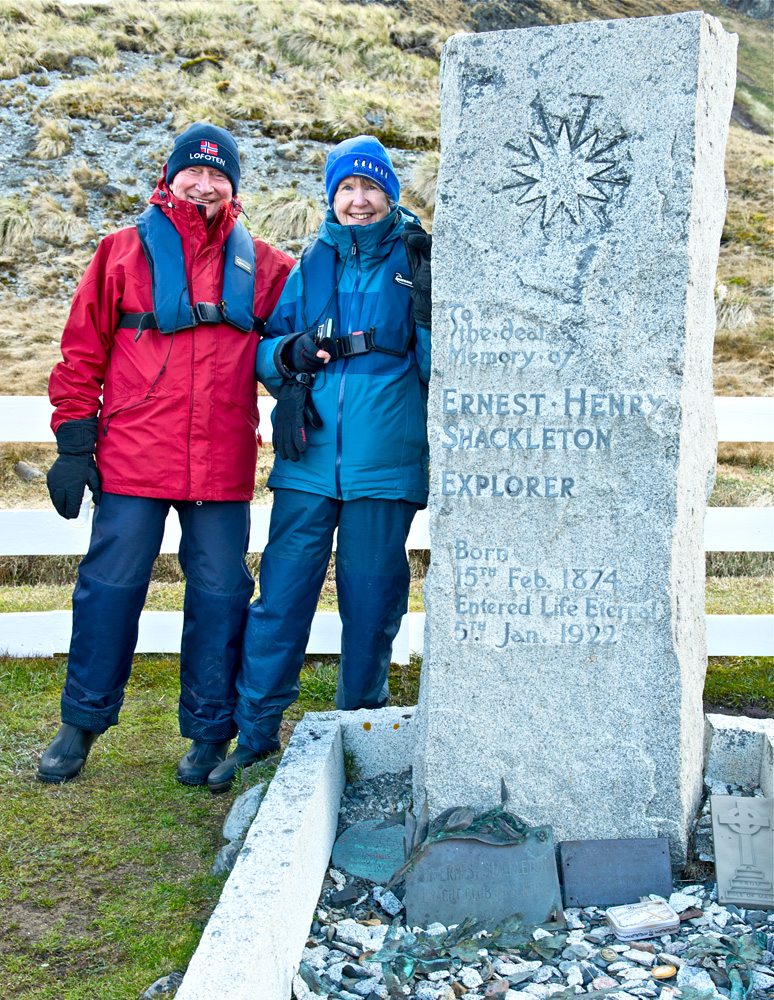 One of the reasons we chose this trip was the kayaking option. We had four outings on South Georgia and four in Antarctica. The guides, Ewan and Sophie, were very competent and got everyone from beginners to experienced paddlers out on the water and enjoying it. 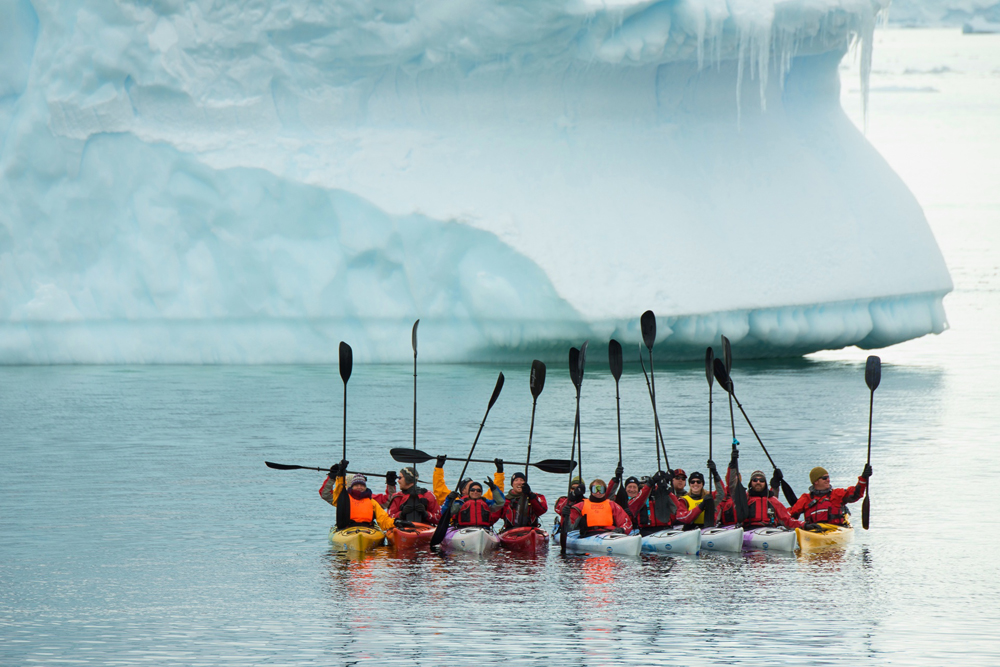 One of the highlights was kayaking through the sea ice in Neko Harbour, crackling gently through the thin ice among the bergy bits. Truly kayaking in Antarctica! 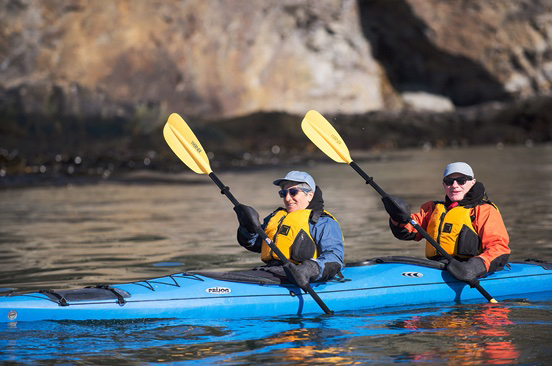 This picture of us was taken off Deception Island, near Baily Head, after we had visited the chinstrap penguin colony. 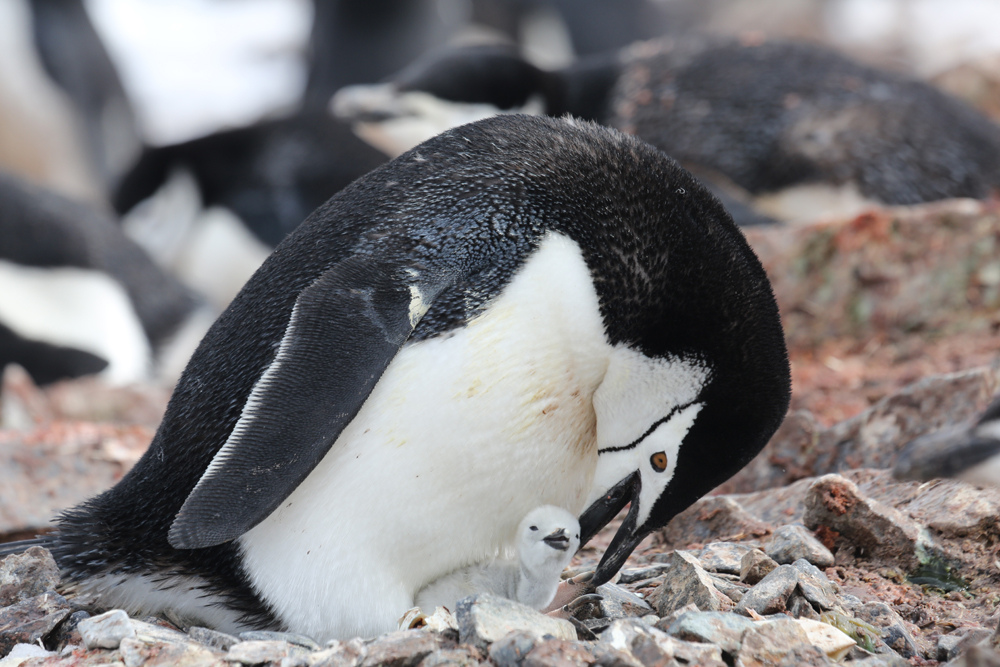 That was a really amazing place. Imagine an entire stadium with 100,000 nesting penguin pairs, squawking, with you in the middle of it all. It is the largest chinstrap colony in the world, and really pristine.

On the way from South Georgia to Antarctica, we had an interesting iceberg event. We encountered B15T, an iceberg that is 28 miles long and 8 miles across. It was dead ahead and had to alter our course by several hours to go around. Here is a link to some information on B15T: https://earthobservatory.nasa.gov/IOTD/view.php?id=85682

We had no problems on our return trip across the Drake Passage, although were racing ahead of a weather system coming through the next day. It was hard to watch one last, spectacular blue iceberg fade into our wake, as we left Antarctica behind us. 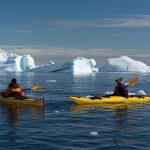 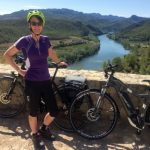 Ode to the E-Bike – what’s so great about them: our experiencesAdventures for a Cause, bike tours, Cultural Journeys, How To, Inspiration, Personal, Travel Tips, Trekking, Uncategorised