In the heart of Africa.

I woke at dawn to hear the breathy barking of impalas, a warning that lions were up and hunting. I sat up to see several elephants ambling towards the water hole below my banda as the equatorial sun bathed the vast plateau in a golden light.

Over the past nine days I have journeyed with our Hidden Places group from the Masai Mara Reserve up to the high dry plains below Mount Kenya. Mostly we have been out of touch with the outside world. But no one has cared, as we are so deeply into this world and its astonishing profusion of wildlife. We’ve encountered a ‘super herd’ of 300 elephants, watched 50 plus giraffes feeding at twilight, and on night drive sat in our jeep amidst a pride of lions – males roaring, females calling their cubs. We’ve gazed cheetahs chasing down impala, at vast numbers of wildebeest, at rhino quietly grazing. In turn we’ve been watched by curious zebra, a host of various gazelles – and once, by leopard lazily lying in the branches of an acacia tree where we had parked for some shade, and lunch. We gazed up, he gazed down – we left quickly but that eye contact is forever etched into my memory.

I don’t want to go back to the outside world. This is where I want to be, my waking and dreaming hours inhabited by the wild, in its purest and most beautiful state. 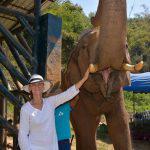 Elephants – Target TrainingAdventures for a Cause, Inspiration, Personal, Wildlife Adventures